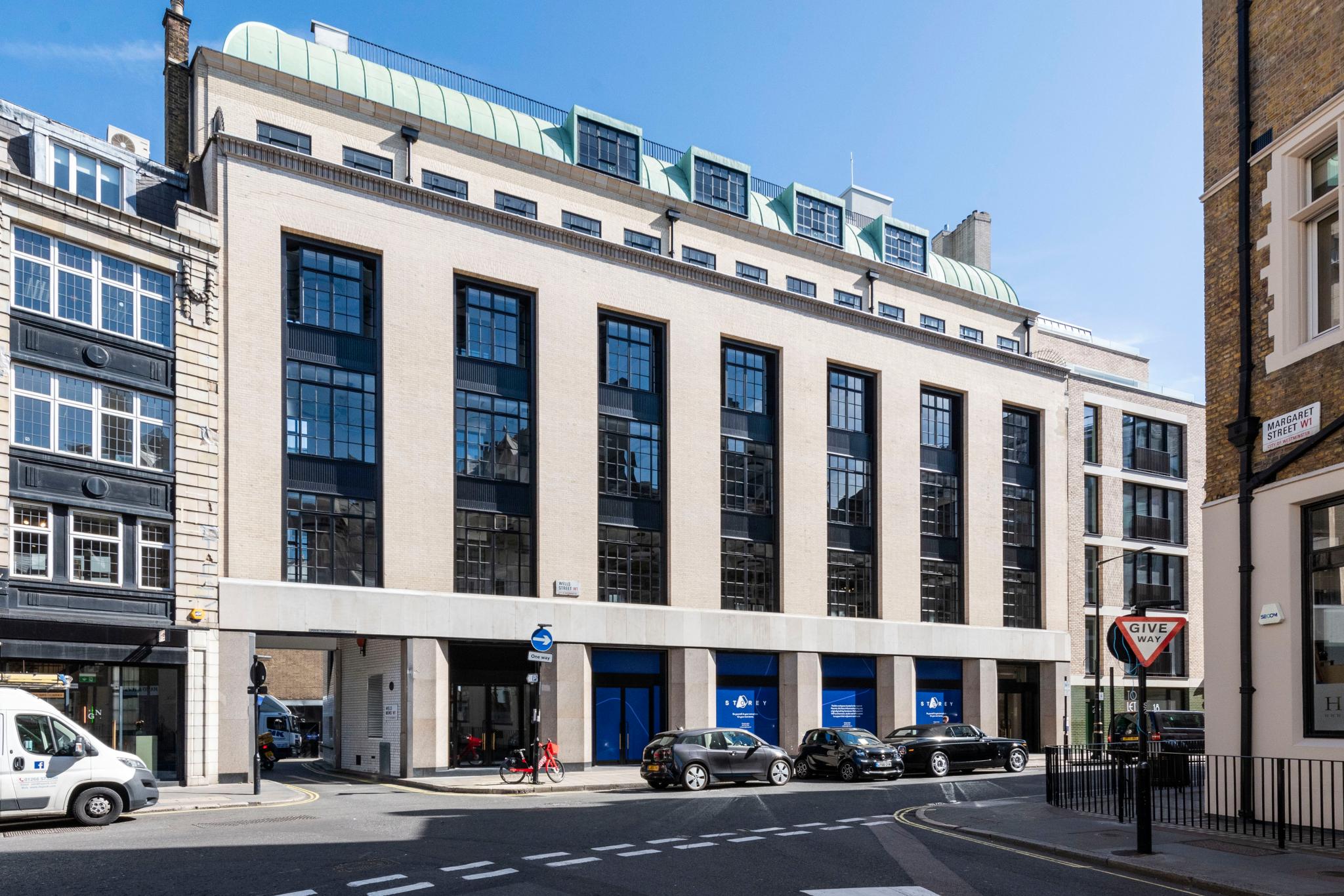 Arthur Sanderson & Sons Wallpaper Company designed the building at 19 Wells Street in 1929 to house their design studio, and to support the nearby Berners Street showroom, located where the Sanderson Hotel now sits. We were delighted to be reminded of our heritage with the launch of Storey’s new office space at 19 Wells Street, which incorporates beautiful design – both past and present. This sentiment resonates with us at Sanderson, where our designs are informed by our heritage yet designed for modern living.

In the late nineteenth century, as Oxford Street rose to prominence as the most important shopping street in the West End, Wells Street became the heart of the emerging fashion and textiles ‘rag trade’ district. Wallpaper importer Arthur Sanderson moved into the neighbouring Berners Street in the late 1800s, where he began building his wallpaper and fabric empire. His growing business quickly outgrew Berners Street, and he expanded by buying up property to the west, on Wells Street.

For decades, Sanderson designers and salespeople came to work in the bustling Wells Street office. They let space on the upper floors to various creative tenants, including the fashion house of Messrs. W. and O. Marcus and Edna Wallace, a fashionable dressmaker and hatter.

For us at Sanderson, the building is a beautiful reminder of our heritage. The work our company has been doing has gently but indelibly left its mark on recent history, not only through our focus on designing fabrics and wallpapers, but through the buildings we designed and inhabited. We are excited to see the young companies that will make their mark on history from this building.

A legacy of design

There is a creative energy about artistic neighbourhoods. Fitzrovia has always attracted artists, from sculptor John Moore to craftspeople, architects, and musicians – including J.C Bach.

At Sanderson, we’ve been designing and innovating for over 150 years, through changing tastes and shifting aesthetic and commercial needs. Our archive has been described as one of the most important design archives in the world, providing not just a history of our company, but also of evolving preferences in the art of decoration.

It is wonderful to see that design has been brought to the fore in the old Sanderson building through Storey’s close partnerships with award-winning designers and architects. 19 Wells Street emanates Art Deco heritage – from the distinguished exterior to its distinctive Verdigris copper roof – and we’re delighted that Storey’s contemporary redesign honours these features.

At the building’s launch, we saw the building’s past and future come together. The event was an intimate dinner with acclaimed menswear designer, Graces Wales Bonner, presented by Disappearing Dining Club and hosted by creative entrepreneur, Otegha Uwagba. It was wonderful to see the same space that played such a key role in Sanderson’s heritage being rejuvenated to inspire a new generation of innovative businesses.

For almost a century, hardworking, creative-minded professionals have gone to work at 19 Wells Street, and we’re proud to see that heritage continuing today.