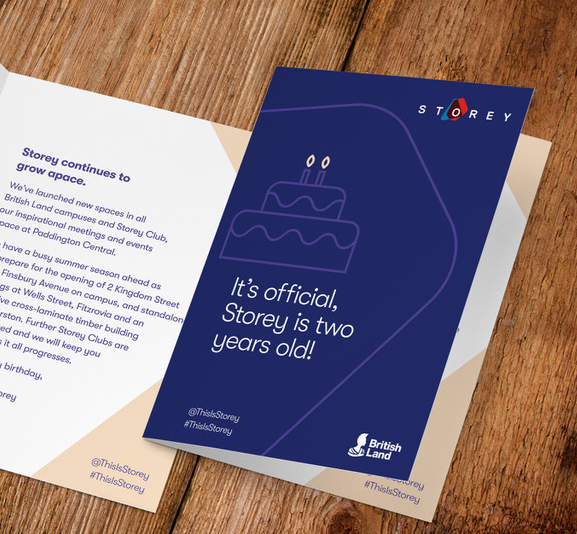 To mark Storey’s 2nd birthday this June, we’ll be celebrating with a huge cake at our new Storey Club space in Kingdom Street, Paddington Central. Already proving a hit with both British Land and Storey customers, other diverse communities such as women’s networks, LGBT+ organisations and mental health awareness groups are also making the most of Club space.

The celebrations will continue with a summer of flexible office openings across our established locations but also at new buildings such as Wells Street in Fitzrovia and Orsman Road in Haggerston; a highly innovative and sustainable canal-side building, made from cross-laminate timber.

In one sense, all of this is just ’the icing on the cake’. What we’re really celebrating is the rapid growth of a business that set out to address the needs of an under-served group of customers; scale-ups, project teams and satellites of bigger companies who all want an office for 20-200 people that can be quickly tailored to their specific needs and designed in a way that makes it feel like their own. As we’ve grown our portfolio of Storey buildings, we’ve been able to support our customers with their own expansion plans celebrating this with a Founding Customers’ Dinner at Storey Club in May.

Looking ahead to the next two years, London’s flexible office scene shows no sign of abating. We’ve set ourselves an ambitious target of fitting out over a million square feet of Storey space in thriving London hubs from Liverpool Street to Euston and Paddington. We’ll also be looking at potential new Storey spaces in historic Norton Folgate and at British Land’s ‘campus-in-waiting’ at Canada Water.

"As we've grown...we’ve been able to support our customers with their own expansion plans"

Final birthday wishes go, of course, to the Storey team, who now number around 40 (it’s not a number that stands still for very long!) and our many colleagues at British Land who have worked tirelessly to deliver Storey’s premium experience to our customers.

Co-lead James and I, would like to thank everyone for their heroic efforts as we look forward to an action-packed summer together.